by Mutala Yakubu
in entertainment

The lyric appears on the star's 11th album, Music To Get Murdered By, which was released on Friday

Eminem has been called “disgusting” and “pathetic” after rapping about the Manchester Arena bomb attack, which killed 22 people in 2017.

The lyric comes in a new song, Unaccommodating, in which the star boasts about his impact on hip-hop.

At one point, he says: “I’m contemplating yelling ‘bombs away’ on the game / Like I’m outside of an Ariana Grande concert waiting.”

It is not the first time the 47-year-old has referenced the attack.

READ ALSO: We are only protecting young people who idolise you from abuse of alcohol – FDA to Wendy Shay

In a 2018 freestyle, he rapped about a brainwashed suicide bomber “seeing Ariana Grande sing her last song of the evening / And as the audience from the damn concert is leaving / Detonates the device strapped to his abdominal region.”

Figen Murray, whose son died in the attack, voiced her disapproval after being informed of the two songs on Friday morning.

“Feels like he is piggybacking on the fame of Ariana Grande and Justin Bieber and says distasteful things about other celebrities,” she wrote on Twitter.

“Not clever. Totally pointless. And before all Eminem fans pounce on me, I am not interested and will not engage.”

Murray’s 29-year-old son Martyn Hett was one of the 22 people who died when Salman Abedi blew himself up at the end of Ariana Grande’s concert in May 2017.

She has since campaigned for the introduction of Martyn’s Law, which would require venues to introduce more stringent security checks.

Hett’s former partner Russell Hayward also voiced his disapproval of Eminem’s latest lyrics, writing: “It’s disappointing but not surprising that #Eminem would use controversial lyrics about the Manchester bomb, dragging the victims’ families & Ariana back into a very dark time.

“Not sure how popular he is these days but I hope any success he gets from the back of this is worth it.”

His comments were echoed by Grande’s fans, who described Unaccommodating as “a pathetic attempt to get attention”.

One fan tweeted the rapper saying: “You’re so disgusting I hope u know that. What u said was very uncalled for and so hurtful to so many people.”

I’m a huge Eminem fan but the lyric about the Manchester bombing is so disrespectful. Possibly my all-time favourite artist has left me disappointed with such a bizarre and hurtful lyric aimed at my city. #staystrongourkid

25 people are talking about this

I love Eminem but this guy really has a bar in his new song mocking the Ariana Grande concert bombing and then has a explosion noise straight after..

Havent heard the new eminem yet and whilst I’ve been a massive fan of his for the longest, I rlly cant stand for the ariana bombing line particularly having met ppl over the last year since I’ve moved here that were actually directly affected by incident…

Tf wrong with #Eminem?
I’ma have to disagree with him on this line because that was a traumatizing event for people who attended in 2017. Some people perished. Ariana was traumatized from the event. I know he says crazy things but, this outta line!#MusicToBeMurderedBy: 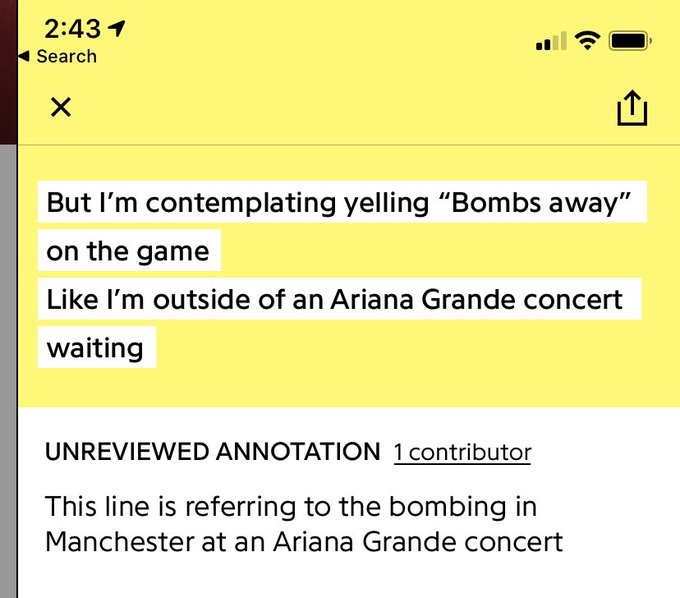 The lyric feels particularly egregious, given that Eminem pledged his support to victims of the bombing in 2017; and urged fans to donate money to families who had been affected.

Join me in helping Manchester victims & their families, Make a donation to the @BritishRedCross and @MENnewsdesk https://www.justgiving.com/crowdfunding/westandtogethermanchester …

Weʼre raising money to support families of those killed and injured in the Manchester Arena attack. Support this JustGiving Crowdfunding Page.

8,999 people are talking about this

Unaccommodating is the opening track on the star’s 11th album, Music To Be Murdered By, which he released, unannounced, on Friday morning.

A follow-up to 2018’s Kamikaze, the 20-track album features cameos from Q-Tip, Ed Sheeran and the late Juice Wrld.

In a stark contrast to the Manchester Arena lyric, the album’s lead single, Darkness, advocates tighter gun control laws in the US.

The song and video reference the 2017 Route 91 Harvest music festival shooting in Las Vegas, in which 58 people died, with Eminem playing the role of an isolated, mentally-disturbed character who plots a murderous rampage to gain notoriety.

The video ends with a montage of news reports from recent mass shootings, captioned: “When will it end? When enough people care.”

Eminem then urges fans to register to vote in the upcoming US elections, writing: “Make your voice heard and help change gun laws in America”.

Photos: Black Stars arrive in camp ahead of AFCON 2023 qualifiers

Alfred Duncan retires from Black Stars at age of 29

The debt challenges are compounding for us in Africa – Akufo-Addo

The debt challenges are compounding for us in Africa – Akufo-Addo

Malawi slashes the value of its currency

No Result
View All Result